Yaya Tankoure is a former football player from Ivory Coats.

Tankoure is depicted riding a tank.

Tankoure seems to be impatient, wanting people to give what he wants.

Tankoure debuted during the FIFAIFOFUM World Cup 2014 Brazil. On his 31st birthday, he attempted to invite Joe Hairt, Vinjury Kompany, and Sheiky by calling them on phone. However, none of them could come, so Tankoure got angry and started destroying the party.

Tankoure has a brother named Kolohno Toure, whom he is seen dancing with in "The Toure Chant!". He had problems with Pep, si? Guardiola as the latter wanted him to leave the club. 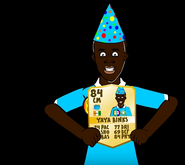 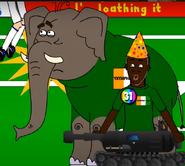