Wayne The Ogre is a footballer who plays for the Championship club Derby County. Before 2016, he was drawn as an ogre and called Wayne the Ogre because 442oons said he looked like an ogre in real life. He previously played for Cleverton, Moneychester United, and Engbland.

He is currently Derby County's manager.

He is considered as an English (and Manchester United)'s legend. 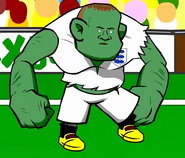