Other club (by manager)

Unwell Paleandgreeni is a former Chiliean football manager. Paleandgreeni first appeared in the graveyard on "Phace Jones Face Song" video, where he tells Jones that he is a monster, not Paleandgreeni (due to Jones' face).

Paleandgreeni also has no idea that a Champions League semi-final has two legs, as he believed there were three. He hits on The Old lady, only to be shot in the head.

Although already dead, Paleandgreeni met his maker during the finale of the Wacky Races series, where he was tossed by new manager Pep Guardiola into the sun. 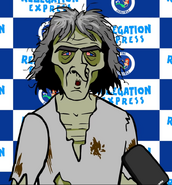