UOAFA Not Many Are Really Champions League 2014/15

The 2015 UEFA Champions League Final was played at the Olympiastadion in Berlin, Germany, with Spanish side Barcelona defeating Italian side Juventus by 3–1 to win their 5th title. Real Madrid were the title holders, but they were eliminated by Juventus in the semi-finals.

This season was the first where clubs must comply with UEFA Financial Fair Play Regulations in order to participate. Moreover, this season was the first where a club from Gibraltar competed in the tournament, after the Gibraltar Football Association was accepted as the 54th UEFA member at the UEFA Congress in May 2013. They were granted one spot in the Champions League, which was taken by Lincoln Red Imps, the champions of the 2013–14 Gibraltar Premier Division.

On 17 July 2014, the UEFA emergency panel ruled that Ukrainian and Russian clubs would not be drawn against each other "until further notice" due to the political unrest between the countries. Another ruling centred in regional instability was also made where Israeli teams were prohibited from hosting any UEFA competitions due to the 2014 Israel–Gaza conflict. The rules regarding suspension due to yellow card accumulation were also changed such that all bookings expired on completion of the quarter-finals and were not carried forward to the semi-finals. Moreover, this was the first season in which vanishing spray was used..

Characters that appeared on 442oons videos 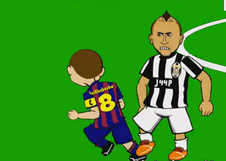 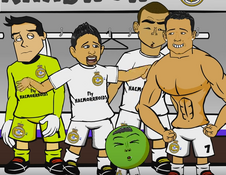