He primarily plays as a forward, but has also been deployed as a winger and serves a captain for Ronaldugal.

He is the father of Cristiano Scorednaldo Jr. He also has two statues that barely resemble him.

Cristiano Arrogantaldo is a Portuguese football player. He is very known for his arrogance and his rivalry with Lionel Messigician. He likes to take his shirt off a lot and scream 'SUUUUU!' when he scores a goal.

He always tries to be better than Lionel Messigician, and the two always argue. However, in many videos since the start of 2021, the two have become closer, as they try to unite to make sure that Kylian MMMboppe and Erling Braut Haaland will never be as good as them.

At age 16, Ronaldo was promoted from Sporting's youth team by first-team manager Laszló Balloni, who was impressed with his dribbling. 2008 the first Ballon d'OR and the FIFARCE World Player of years. Ronaldo win 2013 x 2014 FIFA Ballon d'Or. 2016 Ballon d'Or

When he scores 5 goals vs Granada 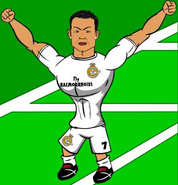 Currently only has scored 1 regional championship,was in the Supercup of Spain,in champions league has scored 4 goals.

And his old name was Cristiano Euronaldo.