First, he was as skinny as ThomasHole Muller and being redesigned for a song about his performance against ManchesterCity. He was made less thin and tall and given a new hairstyle.

He first appeared as Hyundai Min Son in Wacky Races 6 in September 2015, where he beat Cwystal Palace in a race and is performance against ManchesterCity. He was made less thin and tall and given a new hairstyle.

He made a few more less notable appearances .

He is very friends with Hurri Kane. You can see the top very well thanks to the fact that he and Kane shared a song and after Kane wanted to leave Totenham, Son cried because he wanted him to stay. 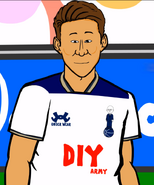