Although Stevie Wellard slips a lot, he actually only slipped one time in real life. He won the 2005 Champions League, FA Cup, and League Cup, but struggled to win much else.

When Stevie arrived at Ingston Villa, he decided to loan in Phil Coutinyho his former teammate. However, when Phil requested to buy another of Stevie's former teammate (Chewy Suarez) he quickly turned down the offer. 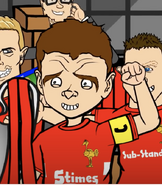