Sergio Redos is a Spanish Footballer who plays for PSlotsofG. He is based on Sergio Ramos.

Sergio Redos appears in the El Clasico 2015, where he failed at defending Suarez, Notaxmar and Inhexcellent's goals. He also appears in the video where Notaxmar wins the Bellen d'Or, ripping off Notaxmar's arms, legs and head. Sergio Redos tends to be the most antagonistic character in 442oons, often cheating or breaking other players legs or arms. For example: Real Madrith won 3-1 against Leavethepool because he broke No Salad's arm in 2018 UEFA Champions League Final. He also has an apprentice like relationship with senõr red card who tells him what to do at times. This has led to him being feared by other clubs which is seen when he is fired by Real Madrid and subsequently looking for a new club. Redos was the Ex-Captain of Real Madrith. 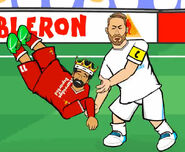 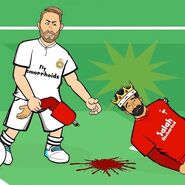 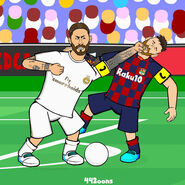