Sergio Buckets is a Spanish football player who plays as a midfielder for Brokelona and Max Spayne.

As his name implies, he was designed like a bucket. Beginning with the 2018-19 season, Buckets has given human design which looks exactly the same as his real life self, but with slightly darker skin and smaller eyes.

His name was first shown on FC Barcelona's players list in 🇪🇸REAL SOCIEDAD vs BARCELONA 1-0🇪🇸(4.1.15 Alba own goal David Moyes Football Cartoon by 442oons), where the club lost to Real Sociopath. The character does not appear until UCL CHAMPIONS LEAGUE FINAL 2015 HIGHLIGHTS CARTOON!!! Goals Juventus 1-3 Barcelona, albeit only his baack being shown.

The first time 442oons reveals his face was in PRAY FOR... who needs what at Xmas Time? DAY 24 - Christmas Eve! Band Aid Song Parody by 442oons), where he is shown between Nacho Fernandez and RTAro Vidal. His first speaking role comes in Barcelona vs Atletico Madrid 1-1 (Goals, Highlights, Red Cards +more!) (Copa Del Rey 2017 Semi-Final), where Buckets asks the referee if he could kick the ball. The latter angrily replies "No!" and Buckets still kicks the ball where he is given a yellow card.

His first speaking role as human was in 👋5 Ways To Sack Koeman👋 (For Free) (feat. Suarez Messi Griezmann) at Barcelona after Benfica 3-0, where he asks if the next Brokelona manager would be Xavi. 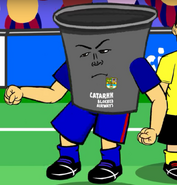