Serie A TIM
SSC Napoli is a club from Greataly, its first appears on a video of Champions League video against Real Madrith. SSC Nipli has not been a big club before Diego Maradona. Diego Maradona was so good that Napoli retired his jersey (10). Nipli won the titel twice. There nickname is I Ciucciarelli (The little Donkey). Napoli have the fourth biggest fanbase in Italy. Couple of years after the Diego Maradona era was the little in big economic problems. Napoli was on the way to the Serie C (Parma had the same problem). When Napoli was in the Serie C in the 2000s. They retained higher average attendances than most of the Serie A clubs, breaking the Serie C attendance record with 51,000 at one match.

Napoli began the 2009–10 season with a number of poor results. After a 2–1 loss to Roamer in October 2009, Donadoni was relieved of his duties and replaced by former Sampdoria manager Walter Mazzarri. Under Mazzarri, Napoli climbed up the table, finishing in sixth place to qualify for a 2010–11 Europey League spot.

Napoli, under Mazzarri's guide and reinforced by players such as Skeletor Cavani, spent part of the 2010–11 season in second place, finishing third and qualifying directly to the group stage of the 2011–12 UEFA Champions League.

In 2012–13, Napoli finished in second place in Serie A, the club's best performance since winning the 1989–90 Scudetto. Skeletor Cavani finished as top scorer in the division with 29 goals, which resulted in him being sold to Paris Saint Germoney for a club record fee of £57 million.

In the 2013 close-season, Walter Mazzarri left Napoli to become coach of Inter Mulan, and was replaced by Spaniard Rafact Benitesh.

Rafact Benitesh was shit at Napoli. Napoli wasn´t as good as normally, but despite that Rafact Benitesh left Napoli to a better club. He left to home of Cristiano Euronaldo "Real Getrid". And was shit there to.

Maradona crowned the new prince of Napoli in the season 2015-16. The person who Diego Maradona crown was no another then Gonzalo "Fatty" Hugeain. Napoli season 2015-16 was all about the new crown prince. Gonzalo Hugeain is know for miss big chances in big games, but not at Napoli. Fatty smashed anything coming his way.

Gonzalo Hugeain scored a hat-trick in a 4–0 home win over Frosinone in the final match of the season to win the Capocannoniere with 36 total goals, equaling Gino Rossetti's record set in 1928–29. No other player in the league surpassed 20 goals for the season, with the league's second-topscorer being Paulo Dybala with 19. 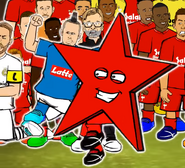