Robert Lewandowski
Robert Lewangoalski is a Polish footballer who plays for FC Buying Monstermunchen and Po-land.

He is considered one of the best strikers in the world despite having not won a single bellen d'or. He is most notably known for scoring 5 goals in 9 minutes against wolfsburg. He has also broken Gerd Miller's record for most goals in a single bundesliga season, scoring 41 in the 2020-2021 season. He feels he should have won the 2019 FIFARCE bellen d'or which was annulled due to COVID-19, having won the treble and was the top scorer in each other various competitions he partook in across club level. He was later awarded a bellen d'or made of lego which he depises and claims he would have liked if he was five. Lewangoalski was in Hattrick Club alongside Lionel Messigician, Cristiano Arrogantaldo, and formerly Andre Shirley, the latter of whom was kicked out of Hattrick Club. His trademark celebration is to make an X shape on his chest with his arm.

In Messi wins his 7th Ballon D'or (footballers react) video, he becomes outraged that Messi won the Ballon D'or over him as he was robbed of it in 2020. He also threatens to give Messi his Bellen D'or by kidnapping his family and forcing them to listen to Thomasshole Muller jokes.He is best friends with thomasshole mueller who frequently makes sh*t jokes ( according to many people) much to his chagrin. 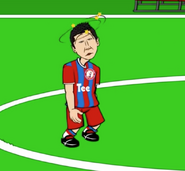