The referees and linesmen are characters on 442oons that appear on most videos. They are responsible to keep the order on the games, whistling when there's a foul or giving yellow or red cards, and, in the case of linesmen, tell when a player is outside. But sometimes they miss doing it or do something unfair and are criticed for it.

Usually the design of referees is not related to the real life one in the game, so 442oons uses some with the same design. The designs are listed below.

These designs are not related to the design of the real life referee or linesman. Their names are unofficial.

He is the one who used to appear most of the times. He was eventually substituted by Dean Stobbart's Head Referee. He was also seen as linesmen sometimes.

The fat referee used to appear in old videos, specially during Premier League 2013/14. He also appeared along other referees in Messi's almost transference to Chelsea. 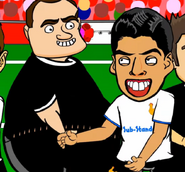 He started to appear in new videos. As his name implies, he is a Referee with Dean Stobbart Head. He is the generic referee who appears the most now. 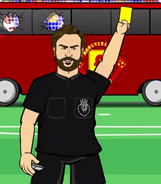 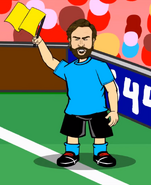 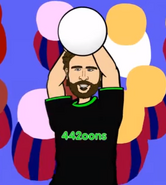 As a ball boy.

As an assistant referee.

He also appears in lots of videos, just like the Ordinary Referee. He has the same hair of Suarez.

He appeared in the second leg of Bayern and Arsene FC for the Champions League 2016/17. His desgin is based in Dopey from Snow White and the Seven Dwarfs. He has this design because he had trouble choosing between yellow or red card for Koscielny.

He appeared in some videos of World Cup 2014 and other videos as well.

He appeared during Copa America 2015. He is secretly a fan of Chilly and he helped the country to get a panalty against Equadoh.

He just appeared during Penaltypool song. 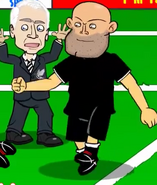 He is fat and has blue eyes. He just appeared during Penaltypool song.

Those are referees who got their own design in 442oons videos.

He first appeared duringn a game of Chelsea against Liverpool, where he was failing to whistle to the fouls of Diego Costly-Coffee and Skorcel. He appeared other times as well. He sent off Gianluigi Buffon a red card on him and Cristiano Arrogantaldo scores a penalty kick against Old Lady

He appeared In the Brazil 2014 World Cup, even though he is Japanese, he used a brazilian shirt and gave a penalty to Fred. He also appeared along other referees in Messi's almost transference to Chelsea.

He appears on some games. His first appearence was in a game of Leavethepool X Saintshampton, where he helped Leavethepool win.

Mike Dean appeared in animated form after Diego Costly-Coffee got away with red card offenses against Arsene F.C. He appeared in other videos as well.

He is a referee of La Liga. He appeared in two matches of Bancelona: one against Atlethemhavetheballico Madrid and other against Real Madrith.

He is one referee of La Liga. He appaered in the El Clasico game Fouling Neymar, where he was a parody of Dory from Finding Nemo and he kept losing his memory and not giving fouls.

He is the referee in the match of Bancelona against Ooh Bettys. He was criticed for not giving a foul and a goal for Barca.

He is a Premier League referee. He appeared in 2015/16 Wacky Races punishing Jamie Voddy and Andy Carrallwaysinjured. He also expulses Granit Xhaka Khan in one match. 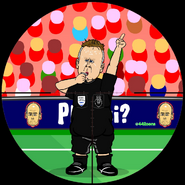 He is a referee in Premier League. He appeared in a few videos. He has a tatoo of a trophy in his left arm. His design used to be a Battenberg cake, but he eventually got a human design.

He is a Premier League referee. He failed to give a penalty to Man Sheiky after Walker pushed Raheem in the box. As a result, he also didn't give a foul to Walker doing other harsher things to Sterling, even killing him. His catchphrase is: "No fowl!"

He is a referee of Premier League who appeared in Footballer 1. He is currently the only referee to appear during Footballer 1 and not be in the Whistle Car.

He is a Premier League referee. He appeared in 2015/16 Wacky Races expulsing Arsey Whinger and he aslo appeared in the FA Cup final. 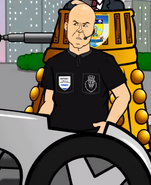 He appeared in a 442oons of the Day where the assistant was pressed by Jose Moaninho to tell the referee that Arsey Whinger had pushed him. However, the assistant decides to report Moruinho's insult so Mourinho is expulsed instead.

He appeared in Champions League 2018/2019 in Vicki Valencia 0-2 Old lady and he send off Cristiano Arrogantaldo for didin't do anything.

He appeared in Champions League 2018/1019 in YMCAMoscow 1-0 Bale Madrid and he sent off Igor Akinfeev for dissent.

He appeared in UOAFA Not Many Are Really Champions League 2019/20 in Chelski Bus Company 4-4 Eye-axe when he sent off 2 of Eye-axe's players to help Chelsea Bus Company come back from 4-2. 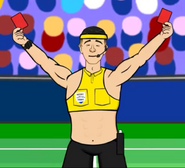 He is The Only Turkish Referee Who Appeared in any 442oons Videos.

He appeared in 7 Ways To Fix Barcelona as he was referee in Leavethepool vs Barcelionela.