Template:League seasonsThe Premier League 2015/16 is one of the main events that 442oons focuses on. It's the main event of English football. It has 20 clubs participating in it.

That's the third Premier League that 442oons makes videos since it's start in 2013. The difference between it and the others is that it had the Premier League Wacky Races.

The champion is Leicester City. The relegated teams are Aston Villa, Norwich City and Newcastle Disunited

Characters that appeared in 442oons videos 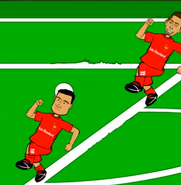