His personality depends on the result of the game. He can be delighted when Manchester City win, but gets mad when they lose.

Guardiola was part of the LMA Hall of Fame and won the Catalan of the Year award in 2009. 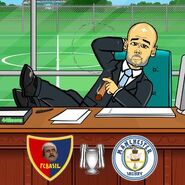