P-E-D-R-O is a Spanish player who plays for ASS Roma. He is a former player of Brokelona and Chelsea FC.

Pedro first appeared on his video song, when he left Brokelona because he wasn't playing in many games. After Ed Woodwood failed in signing him up to Man We're shite, Ed, Pedro went to Chelsea.In the same video, Wayne The Ogre showed up at a conference and called him PAEDO.Pedro quickly got along with the other Chelsea players. He made a very good debut, scoring a goal in that match. He is now one of the club's main scorer.He made a small appearence during the Euro 2016, where his team lose to Greataly. He begs for Del Botch to let he play but Conte kicks him to out of the stadium, making he land near to Bancelona's Stadium.He also makes cameo appearances in many videos, such as when Diego Costly-Coffee visits him and Willian, and when he introduces Conte to Fernando Torres. 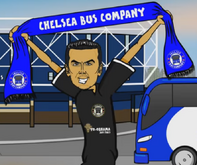 His new appearence, but with a thin body.

Pedro and Del Botch during the Euro 2016.

Pedro when he played for Bancelona.