Neymar has tan skin with spiky dark brown hair and brown eyes. He had a streak of blonde hair during 2016/17 season.

Neymar plays perfectly at both club and international levels. He also has the habit of diving. Neymar helps the referees make right decisions against plays, like Sergio Buckets' 1000 dives.

Neymar announced that he would sign for Barcelona on 27 May 2013 and join the team after the 2013 FIFA Confederations Cup. On 3 June 2013, Neymar was unveiled by Barcelona after passing medical tests, and signing a 5-year that lasted until June 2018. He later formed MSN with Messi and Suárez.

On 3 August 2017, Neymar transferred from Brokelona to PSlotsofG for €222 million, making him the most expensive football player.

During their career in Barcelona, Neymar and Messi were almost always seen together with Suarez, where they later formed MSN trio. The first time they were seen playing together was the El Classico video, where Messi taunts Neymar by comparing his skills and showing his 6 Ballon d'Or or mocking his hairstyle or diving habits.

However, it is proved that Messi likes Neymar a lot, as he cared more about him staying rather than winning the Ballon d'Or. Since Messi moved to PSlotsofG, he has reformed the friendship they once had.

Suárez is a great friend of Neymar. In "Suárez Barcelona Transfer", the two promise to be close friends. They later talk about practicing a link-up play, Suárez did not really like having Neymar taking a penalty because his run-up is too long.

Neymar and Mbappé have been good friends since the former joined PSlotsofG. They also can be seen talking.

Neymar is currently unmarried, but reported to be in relationship with his sister, but also sometimes smashes his mom. 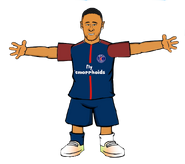 NEYMAR SIGNS FOR PSG!😢MSN are never getting back together...😢
Community content is available under CC-BY-SA unless otherwise noted.
Advertisement