English Premier League
Newcashley Disunited is a club from Engbland. It currently plays in the Premier League after being promoted in 2016/17

It debuted in the Premier League 2014/15 under the management of Alan Buttew. It ended in the 15th place in that season.

It started the Premier League 2015/16 under the mangement of Wolly with the Brolly. But the team had a bad perfomance, so he was sacked and Rafact Benitesh became the new manager. Unfortunately, the club couldn't get enough points and they ended up being relegated to the English Championship. However they were promoted after winning the Championship

In the Premier League Wacky Races (currently Footballers 1) Newcastle's main vehicle was a black and white colored umbrella with wheels piloted by Wolly with the Brolly.

After Wolly was sacked and Rafact Benitesh became the manager, their vehicle became a magpie with wheels. 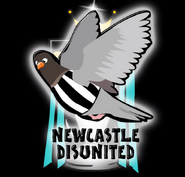 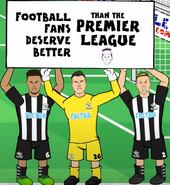