Icardi has light skin with brunette hair swept to the left partially shaved, matching the color of his subtle beard, and brown eyes. His character design is nearly identical to Lorenzo Insigne.

Icardi is known for flirting with other women, especially Lionel Messigician's wife as seen in "MNM Song".

Icardi is of Italian descent through his paternal ancestors from Piedmont.[1] He has both Italian and Argentine passport, but chose to play for his place of birth.[2]

After Icardi snatched Pierrrrre-Emerick Ibangyermam's striker position in a Dream Team, he keeps losing by causing a lot of sliding. His Dream Team teammate Javier Pastore says his unlogical tackling and speed, causing Icardi to be slided by teams.

Icardi has a rivalry with Maxi Lopez as the latter divorced his wife, Wanda Nara. 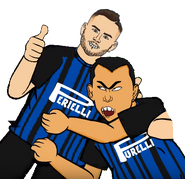