From Wikipedia, the free encyclopedia

Founded in 1906[1] as the HaRishon Le Zion-Yafo Association, Maccabi Tel Aviv is the oldest, largest and most decorated football club in Israel. With the establishment of the city of Tel Aviv in 1909, the club changed its name to Maccabi Tel Aviv. In 1922 they became the first Jewish football club to participate in local competitions. The meaning of the name Maccabi – 'there is no one like you among the gods' (it refers to the Jewish god) – forms an integral part of the character of the team, which took the Star of David as their logo to represent the Jewish people. Maccabi Tel Aviv have won more titles than any other Israeli club, winning 22 League Championships (17 after Israeli independence), 23 prestigious State Cups (16 after Israeli independence), two AFC Champions League Cups and an additional five Toto (League) Cups.[2]

Maccabi Tel Aviv is the only Israeli football team that have never been relegated from the Israeli Premier League and one of three only Israeli teams ever to make it to the UEFA Champions League group stage. The club is named after theMaccabees.

Maccabi Tel Aviv FC invest a lot of money in the development and nurturing of young talent. The club's youth system operate football academies at three sites in the Tel Aviv area, working with over 750 children aged 6–15. The club also runs 17 youth teams with 400 players between 9 and 19 years old. These teams tend to compete very successfully in local and national leagues.[3]

Durims decided to establish the Palestine League. In the same year the State Cup was founded under the name "People Cup". That same year, the first Tel Aviv derby was played, with Maccabi winning, 3–0. Maccabi won their first State Cup in 1929 after beating Maccabi HaShmonai.[4] Maccabi won the State Cup for a second time in 1930, beating the 48th (Northamptonshire) Regiment of Foot 2–1, and a third in 1933, when Hapoel Tel Aviv were beaten, 1–0.

In 1936 the club was invited to play in the United States. On their way, Maccabi played in France, losing, 2–0, to Racing Paris and 3–1 to Lille. In the United States, Maccabi defeated the All-star team of New York City in front of 50,000 in Yankee Stadium.[4] Maccabi also defeated the American Soccer League team inBrooklyn and Philadelphia on their home ground, 1–0, and also played in Canada, where they drew, 1–1, with Toronto All-Stars. Maccabi continued their tour in the USA and lost, 3–2, to St. Louis Stars and theBoston Celtics.

After returning from the United States, Maccabi players went on strike because they had not been paid. In 1937, after a year of strike action, the Football Association accepted their demands and the team ended their strike. In that year, Maccabi Tel Aviv also won their first league title. In 1939, after the start of World War II, Maccabi won their second championship. At the end of the season, Maccabi went to another tour, this time to Australia[4] where they were advertised as the "Palestine" team and occasionally the Maccabi Palestine team. They played 18 games, winning 11, losing 5 and drawing 2. The games were against State sides (New South Wales, Victoria, Queensland, South Australia and Western Australia), regional sides and five "tests" against the Australian national team, winning one, drawing one and losing three. 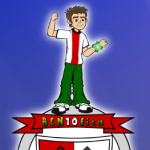