Markos Badly Roho is a Handballgentina football player who plays for Boca with Teeth Juniors.

His name is a reference at how he is bad at marking other players because he is a defender.

He did't let Diego score and later on gave a "first class stamp" on Eden Hazardous. 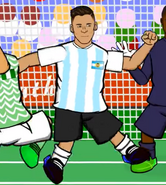