He first appeared in the Not Many Are Really Champions League where he scored against PSZ. He is one of the best players in the Premier League and one of the best midfielders in the world.He first appeared in the video that Dean drew him.Then he has been included in so many other videos like PSZ vs Man Sheikhy, In premier league videos,in Balln’dor Rap Battles and in other Man Sheikhy videos like Man City Vs Liverpool and in the UCL 2016 and 2018.He has also appeared internationally in Euro 16 (Vs Pub Of Ireland,and many others) and in World Cup 2018 (Vs Brazil,and many others) 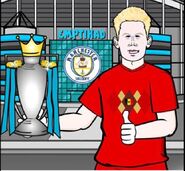