The eSpecially Annoying One

That was ghost goal"

"You're a specialist in failure" (usually to Arsey Whinger)

"Good one Roman/Arsey, good one"

UOAFA Not Many Are Really Champion League

Jose Moaninho was the former manager of DIY Army, Mouchester United, Chelsea FC, Real Madrith, Intercity FC Pothole and Benfica and as assitant manage Barcelona. He comes from Ronaldugal. He was born on January 26, 1963. He loves to park the bus. He is the current manager of Ass Roamer

Jose the is known for being quite a comical character (as are many of the others) but also tend to annoy many of his other characters, especially his archrivals. He also loves to make excuses after losing a game

His arch-rivals may include:

Arsey is more well known as his most hated character so much so that a video was made of all the fallouts they've had in 442oons history. Jose almost all the time refers to him as a "Specialist in Failure" and often annoyed him in his Q&A.

Jose started his 442oons career singing in Bland Aid the song "Pray for Moyes" and has since been a regular on the channel.

He is often heard singing songs these include, "Jose's Bus has parked again", "I am the Special One", "Who won the League" and "Don't blame it on Jose".

He also sang and appeared on the first day of the 442oons Advent Calendar. In December 2015 Roman sacked him after a poor form of results. After Manchester United won the 2016 Sweet FA Cup, Van Harsh got sacked and then Jose became the manager.

In his first official game for United he beat Nigellester City to the charity shield in 2016, going on to win the Insert new sponsor each year cup and the europey league despite finishing sixth in the premier league.

In December 2018, Mourinho got sacked by Manchester United. The month after he signed for DIY Army and failed to win a single trophy at his time there. 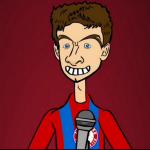