Phil Jagerbombielka, Nicolas Ottermandi
John €50nes is a Manchester Sheiky F.C. and Engbland player. He plays as centre back and is former player of Cleverton.

He has been called to the Euro 2016 but didn't played any game.

He doesn't have a good relationship with Sterling as seen in one of the 442oons of the day videos where Pep tells Rachem to be a defender, which initially disagrees with Rache, but Pep gives him money, which makes the defender, and how he fails to stop one of the Stoke players, pep burns the note which makes John Stons and the Stoke footballer laugh 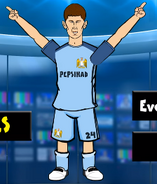