Premier League 2014/15
Premier League 2015/16
Premier League 2016/17
Euro 2016
Jesus Allen, formerly Welsh Pirlo / Welsh Xavi is a Welsh player who plays for the Stoke Wet and Windy and is a former player of Swanastery and Leavethepool. He is based in the player Joe Allen, he is known as "Welsh Xavi / Welsh Pirlo". In an official interview he said he likes to be called as "Pirlo". He also appeared in the Wacky Race 21 with a shirt saying "No Pirlo no party". 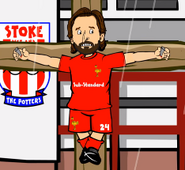