Jamie's Come Fardy is a character that plays for Nigelesster City and ioio Engbland..

He wears the number #9 shirt for his club. He made his debut in the twelfth episode of Premier League Wacky Races when Gomess kicked him into the record books. His catchphrase is 'CHAT SH*T GET BANGED'. He won the 2015/16 Premier league title and the 2020 Premier League golden boot. 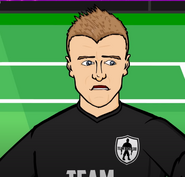