Jack Wheelchair is a BorEngland football player who plays for AGF.

He is know for smoking and constantly being injured. Because of that he is often seen with crutches or in a wheelchair. There are lots of patches on his body.He clearly states that he hates Tottenham, what made Hurri-Kane and Adele Alli hit back his provocations.He and Wayne The Ogre once combined three goals and called it "Smokers hattrick".Despite being very injured, Woy Bodgson let him play in the Euro 2016.He used to play for Jason Bournemouth on loan from Arsene.He signed for West Hammers and was injured all the time

Jack and some Arsene players in 2014. 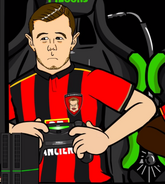