Jack GrealEnglishIrish is an English football player who plays for Banchester City.

Born in England to Irish parents, Grealish was eligible to represent either England or the Republic of Ireland at international level. He was capped by the latter between U17 and U21 level before switching to England in 2016. As a result of his family background, 442oons gave him the surname "GrealEnglishIrish". 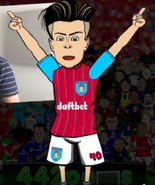