Harry Kane was on loan to Leicester city where he met Vardy. He was substituted in in the semi-final playoff against Watford where he met Troy Deeney.[1] 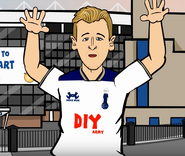