Gonzalo Hugeain is a football player who plays for Inter Miami Retirement Home.

Higuaín was born in Brest, France, when his father was playing for Stade Brestois 29. Despite this, he is not fluent in French language. Higuaín debuted in the Cuppa America Chilly 2015 final where he missed a penalty when no one was around to protect the goal. This led to Carloth Teveth to start mocking and blaming him for losing the finals against Chilly. In 2020, he was sold by Ronventus to Inter Miami Retirement Home once his contract expired.

Higuaín is friends with many football players, including Paulo Dyballer and Marek Hamrollsik. 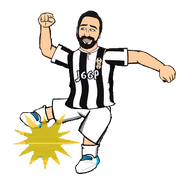