Giorgio Chiellinguine is a Greataly football player who plays for Old Lady.

Originally, Chiellini had the same body as Cristiano Euronaldo and Garry Bale. However, beginning with "UCL Intro Theme Song", he was given more realistic design.

Chiellini tries to avoid being bitten as seen in his debut video.

Chewy Suarez bit him during the FIFAIFOFUM World Cup 2014 Brazil, making Chiellini one of the footballers who has been bitten by Suarez.

Suarez biting him in the 2014 World Cup 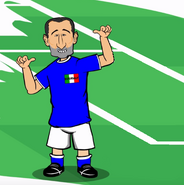