Piqkira has fair skin with spiky dark brown hair, thick beard, and brown eyes. Beginning with 2021/22 season, his hair with his beard shaved.

Piqkira is known to be aggressive as shown in ⏱️Suarez & Pique - Football Therapy!⏱️, where it is his first speaking role.

Piqkira was first mentioned in Champions League 2014/15 when the referee asks who has stolen the net, to which MSN answered "Piqué, of course!" He debuted in 442oons of the Day! Day 16! (Pique tweets, Hernandez hat-trick club, Euro 16 draw reaction!) where he gets tweets from Real Hazardid players after a draw with Barcelona. Piqkira speaks for the first time in Barcelona vs Atletico Madrid 1-1 (Goals, Highlights, Red Cards + more!) (Copa Del Rey 2017 Semi-Final). 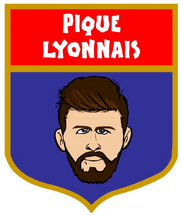