Ronventus (on loan from Fiorentina)

Federico Chiesa is an Italian football player who plays for Ronventus, on loan from Fiorentina, and Greataly.

Chiesa has fair skin and brunette hair with a strand in the front. He has thick eyebrows and brown eyes. His thin lips are noticeable. Chiesa is normally depicted wearing a long-sleeved variant of his jersey.

Chiesa signed from Fiorentina to Ronventus in 2020 on loan. He made his only speaking role in 442oons on the video "Ballon d'Or 2021 - The Nominations! Footballers React..." (timeframe 0:50).

He is the son of former football player Enrico Chiesa, who also played Fiorentina during his playing career. 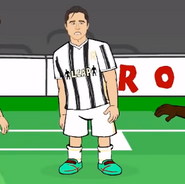 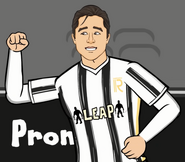