Emiliano Martinez plays as a goalkeeper for Ingston Villa and Handballgentina.

He signed for Arsene F.C. in 2012 and had many loans. First, in 2012 Martinez was loaned out to Oxford United, from 2013-14 he was loaned out to Sheffield Wednesday, in 2015 Rotherham United got him on loan. In 2015-16, Martinez was loaned out to Wolves, but for the following two years he was loaned out to Getafe before being loaned to Reading for 2019.In 442oons, Martinez made his debut appearance in the OSM Super League, but made his first and only video appearance in a 2-1 victory against Leavethepool. He won with Handballgentina in the Copa America 2021.Martinez first spoke in the "Bruno penalty miss" where he was telling Bruno Penandes to leave the penalty to Cristiano Arrogantaldo. He was also seen dancing after Bruno missed the penalty. 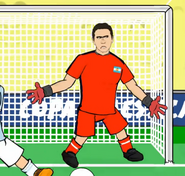