It has a red crowned eagle like the real Frankfurt badge.

Eintracht Frankfart is a reference to farts.

The reason why it appeared was because DVD played against them and in the previous DVD appearence (against Legia Warsore), Dean made a poll asking if they wanted to see the 12 goals of the game (8-4) animated at two pitch angles or the 12 goals at scoreboard level, but in the pool both answers were the same, "12 goals animated at scoreboard level". This is also the reason why we first see Frankfart in the scoreboard.

Eintracht Frankfart will appear in the UOAFA Not Many Are Really Champions League 2022/23 after winning the UOAFA Europa League 2021/22 beating Power Rangers FC since Welsh Rambo missed a penalty. Rafael Santos Borre scored the equalizer and winning penalty. 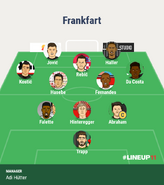