"I want to leave RIGHT NOW!"

Payeater is a Les Blose and OMG player. He formerly played at West Hammers.

At the beginning Premier League 2015/16, he was just mentioned by name. He made his debut in a video of that season in 2016. He later appeared during Euro 2016.

His main appearence was in Transylromania X Les Blose when he scored a wonder goal. He appeared in other videos of the Euro as well, since his country made it's way to the final. 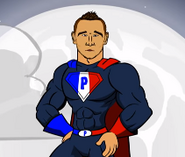