Ligue 1 , UOAFA EURO 2016 France
Danijel Subwaysic is a Croatian footballer who plays as a goalkeeper for AS Moneyco FC in Ligue 1 and the Croatian national team. He is one of the best goalkeepers of 2014/15 and made a good start in 2016.

In Monaco 3-1 Arsenal he is shown defending all shoots succesfuly and stoping the Arsenal attackers from scoring along with Jose Mourihno.

He was the best goalkeeper in Uefa 2014/15 becuase only 3 times did ball get in the net when he was on the pich (Stekleenburg was one of the worst for he scored an auto goal versus PSZ).In the EURO 2016 he saved a penalty from Sergio Ramos(Croatia 2-1 Max Spayne)

Don`t mistake him for Stipe Pletikosa who was the worst goalkeeper in World Cup 2014 and also a Croatian goalkeeper. 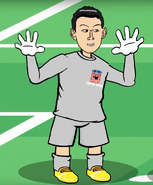