Dani Elvis is a Badzil football player who plays for Brokelona.

Not much is known about his personality, but, as a defender, he often makes fouls to not let the players from other teams pass with the ball.

His most prominent appearances were during the FIFAIFOFUM World Cup 2014 Brazil and UOAFA Not Many Are Really Champions League 2014/15.

He also appeared in the game against Atletic Bilbao, where he made a foul. Since it was a parody of The Hobbit, he appeared as Daniel Gandalves.

in Season 2016/17 he appeared in 5/6 Champions league game scoring 1 goal in Semifinals and 2 assist for Gonzalo Hugeain, and lost the final against Real Hazardid 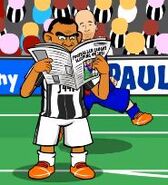 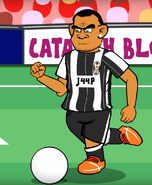