Cristiano Arrogantaldo is one of the most important characters in 442oons ( according to himself). He can be arrogant and narcissistic sometimes. He is rivals with Lionel Messigician. He is from Portugal, And has played for sporting CP, Maanchested united, Ronal Madrid,Juventus and is currently playing for Manchester United CR7 is one of the best players of all time ( according to himself ) and likes to call himself the GOAT.

He has won 5 Bellen D'Ors. He is the bitter rival of Lionel Messigician (who's won 6) for the best player in the world and they like to mock and tease each other about the most petty things.

His trademark celebration is to jump and shout "Siiiiiiiiiiiiiii". He also likes to go topless (he says he looks good without it). When someone fails, he usually says "Heh heh!". He also love to annoys and mock Bale.

He is arrogant and selfish, preferring himself over the team and he always asks everybody to pass to him as he is great at scoring goals.

Cristiano Euronaldo is because his teammates won the UEFA Euro 2016.

Cristiano Arrogantaldo is because of his arrogant mannerism.

CR7 are the first letters of his name (Cristiano Ronaldo) plus his squad number (7).

He debuted in the World Cup 2014. He appeared in the opening song along other players. He teased Messi and later took off his shirt and squealed "Suuuuuuu", making the other players leave the beach.

He played against Germapenalty but he didn't find the ball and his country lost. He appeared in Messi's match against Irun to tease him, but was frozen by Messi.

He scored against Barca and he looked for Messi to tease him, but Messi didn't appear.

He appeared in the opening title with his team, holding a Champions League trophy saying that it was their decima (tenth).

He mocked Messi when he failed to score against Man. Sheikhy.

He scored a great bicycle kick which many other footballers attempted to do but failed.

He played for Ronaldugal in the 2018 FIFARCE World Cup. He scored a hat-trick against Max Spayne.

He signed for Old Lady in July 2018. He recieved a red card against Vicki Valencia in his first UOAFA Not Many Are Really Champions League game for the club.

He, alongside messi started a channel called the frontmen consisting of himself, messi and other footballers (changing each season) attempting to do popular social media challenges and other stunts like goals,e.t.c.

The channel was stopped in the 'frontmen finale' in which players tried to get fired by ronaldo, therefore leaving the frontmen.

He also appears in a yearly event where top footballers like messi and himself rap battle to decide who takes home the coveted prize. He has won this 5 times and counting 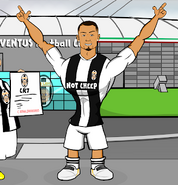 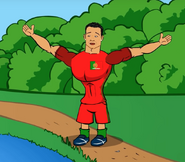 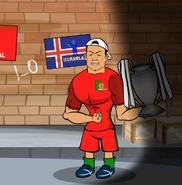