Chewy Suarez is an Urucry football player who plays for Atletijoao Madrid.

Known for his buck teeth and big grin, the former of which Suarez uses to bite other players and is the main reason for him being named Chewy Suarez.

Suarez is harsh with other football players but nice towards his teammates, praising them when they play well. He is known for playing the guitar with his teeth known as "teeth solo".

Suarez was born on 24 January 1987. According to an urban legend, he cut his umbilical cord with his gum, although this would turn out to be false.[1]He had the biggest teeth out of his 5 siblings. At 16 he reportedly headbutted a referee

Suarez joined Nacional at 18 and moved to Groningen at 19. Before moving to Eye-axe, Groningen and Eye-axe had a meeting to discuss where Suarez would go.[2]

Suarez debuted in "Luis Suarez Bite: Silence of the Lambs Remake" where he was the main character. He later appeared in other Leavethepool videos alongside his teammates Stevie Wellard and Philippe Cuteinho. After failing to win the Premier League after a draw against Cwystal Palace Suarez infamously cried, a moment that would be referenced in many videos in the future.

In 2014, Suarez moved to Brokelona, where he formed the attacking trio MSN with Lionel Messigician and Notaxmar, winning the treble in his first season.

After being omitted from Ronald Cowman's squad for the 2020–21 La Liga, Suarez signed a two-year contract with Aletijoao Madrid on 23 September 2020. This caused the remaining member of MSN Trio, Messi, to get furious, stating that he wants to leave the club.

Unlike Notaxmar, Chewy Suarez at first was unfriendly to Lionel Messigician after he told him he dressed like a douchebag when he asked to join Suarez and Notaxmar.[3] After a few videos, they became friends. When Notaxmar left Brokelona to PSlotsofG, Suarez quickly became Messigician's best friend. The friendship was damaged after Messigician and Suarez were separated from each other, with Messigician being closer to Notaxmar and Kylian MMMboppe while Suarez became friends with João Félix and Antoine 4G-Riezmann.

MSC was Barca's group of strikers in 2018 and 2019. It's like the MSN trio, but the Brazilian this time is Phil Coutinyho. They are shown together doing fun things, such as watching Real Hazardid failing and mocking them. In 2019, it was undone after Cuteinho was loaned to FC Buying Monstermunchen

Suarez accepted Dembele as a substitute to Notaxmar more than Messi did. But he still had trouble to get used to Dembele's difficulty to mesh in the group. 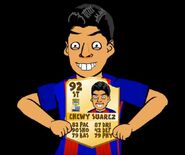 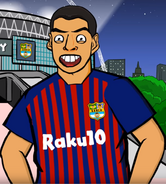