Chelsea Kids is a club from England. It is based on EPL club Chelsea

is a reference to how many young players Lampard Plays. Edit

Chelski is a reference to Roman Imveryrich, the owner of the club who is a Russian.

Chelski/Chelsea Bus Company is a reference to Moaninho "park the bus" strategy.

Chelsea Guus Company is a reference to the manager Guus Hiddink, who coached the club after Moaninho was sacked in 2015.

Conte Won the Premier League But he was Sacked the season afterwards Because they lost to Bournemout*h 0-3 at home.

Lampard Came Back and started playing the kids due to a transfer ban.

Its badge features the head of the current manager: Frankly Loanfarce

Out on Loan Edit

Events in the 442oons World Edit

Care in the Community Shield Edit

UOAFA Not Many Are Really Champions League Edit 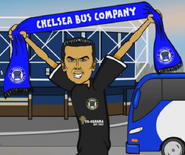 Retrieved from "https://442oonsorg.fandom.com/wiki/Chelsea_Kids?oldid=37524"
Community content is available under CC-BY-SA unless otherwise noted.