Euro 2016, Premier League 2016-17
Calvin Clyne is Jason Bournemouth and Engbland player. Despite being named beforehand, he made his debut in the England plane to France video in June 2016. He made his first appearance in a Liverpool shirt in the Klopp vs Wenger Rap Battle in August 2016

His appearance has not been altered. 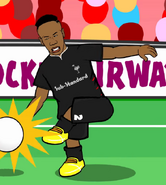