Brent FC are a English football club in London, England. They currently perform at the Premier League, after being promoted from the Champion-ship after winning play-offs.

It is a white circle with David Brent on the center of the badge, and a red border which says, "BRENT FC".

Their name is Brent FC since David Brent’s name is similar to Brentford.

They debuted in CANCELLED! Premier League Song 21/22 and they appeared in the final scene, They then appear in some Premier League managers react to matchday videos. 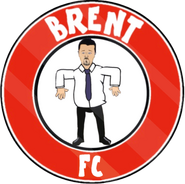