He cares about "Hard work", "Intensity", "Honesty", and "Character"

He first appeared in Suarez's Seven Sins, where he talks to him about a transfer to Arsenal. Premier league from this season also appeared in several videos.In the 2016 17 season, it was designed to be human, but a sea elephant doll was featured frequently in these videos 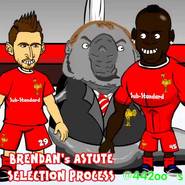