Bobby Firmino is a Brazilian player who plays for Salahpool.Revaled of Atletico WinsMG Ya Mum

His first appearence was on the game Salahpool X Man. Sheiky, when Leavethepool won it with 4X1. He played along with Cuteinho, making an assist to him and later on receiving an assist from him.

He also appeared at Star Wars Wacky Race and Klopp's Chrsitmas Message along with the other Leavethepool players.

He appeared flying on Helikloppter on the Wacky Race 21, just before being hit by Olivier GQ cannon.

He also appeared in the first leg of the game Leavethepool X Yellow Sumbarine for the UOAFA Europey League 2015/16. In that video, Klopp prefered Roberto instead of Sturrinjured, what made Sturrinjured very angry.

He appeared in the third game of the 2017/18 season against Arsenal.

He also appeared in the fifth game of the 2018/19 season against Tottenham when Vertonghen picked his eye. In this season he has a video where is the protagonist titled ''The Firminator''. In this video he scored the winning goal for Salahpool.

rmino inside, Joe shoots on Olivier. 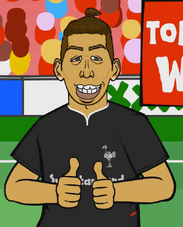 Firmino winning the ucl with Salahpool
Add a photo to this gallery
Retrieved from "https://442oonsorg.fandom.com/wiki/Bobby_Firmino?oldid=38625"
Community content is available under CC-BY-SA unless otherwise noted.