BelJan Vertonghen is a Belgian football player who plays for Ben10fica.

He has brown hair, small eyes, a small ginger beard, big ears, and thick brown eyebrows. He has always had this design.

BelJan Vertonghen first appeared in F1 Race 7, and mostly appeared with friend Toby Eldersquirrel, they are almost always next to each other, since they are friends and defenders. He appears laughing at the missed Arsenal Fan TV FC shots in Arsenal 1-1 Spurs. It appears that he is allergic to leather in Belgium 3-2 Japan turns out he is not allergic to leather. In 2018, he poked Bobby Firmino's eyes in Liverpool 2-1 Spurs 2018. Bobby Firmino poked his eyes in Liverpool 2-1 Spurs 2019.

He used to poke Bobby Firmino's eyes in Liverpool vs Spurs videos, but then in the preview of the UOAFA Not Many Are Really Champions League 2021/22 quarter finals, he poked a Bobby Firmino cardboard stand-up/cardboard cutout in the eye. 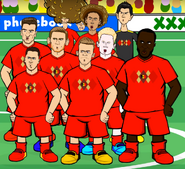