There is a problem with parsing the infoboxArsey Whinger is a former manager of Arsenal Fan TV FC and currently works at FIFARCE. He has a great rivalry with Jose The Special Mong (formerly) and he doesn't like Piers Moron. As seen in one of the videos of "Premier League Wacky Races", his car is a cannon with an Arsenal FC badge on the side, a lever and no seats. He was born in (1949) October 22.

Whinger is very caring about his team members and he makes it possible to win, and he also can get angry really fast, especially when Jose The Special Mong taunts him.

Once the second finest manager in the league second to only Sir Alex Ferguson, in recent years Whinger has failed to deliver and is often on the receiving end of Dean’s (the head of 442oons) insults.

He was in 442oons’ first-ever video alongside Chewy Suarez (and was the first-ever manager to appear in a 442oons video).

He Is Based On Arsène Wenger. 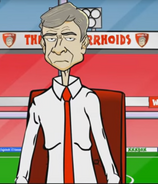