Arkadiusz Milkybarkid is a Po-land football player who plays for Marseille.

He has black hair and brown eyes

Rather calm rare, but when he is sad, he hugs the coaches when liverpool won with napoli and he skipped, he hugged his coach carlo angellotti

It was first mentioned in DAY 3! Euro 2016 (Germany vs Ukraine l Poland vs Northern Ireland l Turkey vs Croatia Highlights) was mentioned by the narrator but he appeared in person in Switzerland vs Poland in 25 SECONDS! (1-1 Euro 2016 Last 16 Highlights), where he assisted Jakub Blazirandomeletterski, then he had single appearances with the SSC Nippli team, he also played in band aid 2016 with other footballers on 442oons videos, he returned at the end of 2018 where he could not shoot against Alisson, which makes Yougurn Klopp at him angry and then Carlo Eyebrowcelotti first hugged him and then in 2019/20 champions leauge group stage draw reacts Carlo Eyebrowcelotti who choked him so that he would not creak again, then he made a cameo appearance in 2019/20 the last 16 champions leauge song and last time appeared in Coppa Italia 2019/20 where he scored a final penalty then left for Olympiqu Marseille where he has yet to make any appearances 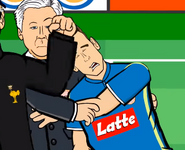 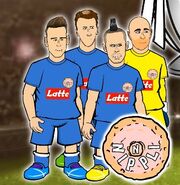