9
Alvara Moratahahaha is a player of Max Spayne and Ronventus on loan from Atletijoao Madrid. He formerly played at Ronal Madrid and Old lady.

He is possibly envious and vengeful, because he was angry for not playing in the first 11 for Ronal Madrid and he mocked Batshuayi after he scored an own goal.

His name comes from a song that Arsey Whinger sung after Arsene FC drew with Chelsea FC and he missed the last chance of the game.

In 2014 summer, he was sold to the Old Lady, he destroy his former club Real Madrith in Champions League semifinal and scoring in the final against Bancelona but lost the match.

In summer 2016 Real Madrith buy again him for one season and benched him.

In 2017 he was sold to Chelsea FC, but he never showed something really special like 2015 in Old lady. Become the next Torres, changed his kit number from 9 to 29.

In January, it was decided by Chelsea and he will be loaned to AtleDiego Madrid.

Against his old team, Juventus, he scored a goal but disallowed by VAR [1]

In March UCL, he scored the last goal vs Liverpool, sealing the defending champion's title defend, much to dismay of Liverpool supporter. 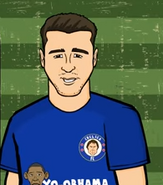