He's based of Alex Oxlade-Chamberlain and Ninja turtles, due to many people thinking that Alex looks like one of the Ninja turtles.

He also appeared in game between Engbland and Sham Marino, passing to Adam The Llama make a goal, but the linesman considered him outside so the goal was not valid.

He appeared in the game of Arsene X Bancelona, for the Champions League. In that match, he had his ankle snapped by Rascherano's dive in.

With Adam The Llama and the linesman. 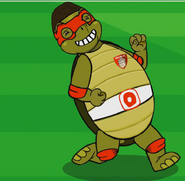 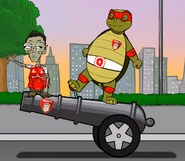