F*cked in the Tyne

Aleksandar Mitrovic is a Serbestia football player who plays for Foolham. 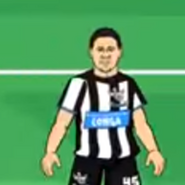